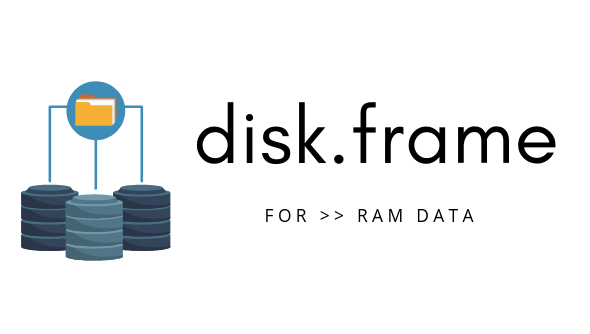 {disk.frame} has been soft-deprecated in favor of {arrow}. With the {arrow} 6.0.0 release, it’s now capable of doing larger-than-RAM data analysis quite well see release note. Hence, there is no strong reason to prefer {disk.frame} unless you have very specific feature needs.

For the above reason, I’ve decided to soft-deprecate {disk.frame} which means I will no longer actively develop new features for it but it will remain on CRAN in maintenance mode.

To help with the transition I’ve created a function, disk.frame::disk.frame_to_parquet(df, outdir) to help you convert existing {disk.frame}s to the parquet format so you can use {arrow} with it.

Thank your for support {disk.frame}. I’ve learnt alot along the way, but time has come to move on!

How do I manipulate tabular data that doesn’t fit into Random Access Memory (RAM)?

In a nutshell, disk.frame makes use of two simple ideas

disk.frame performs a similar role to distributed systems such as Apache Spark, Python’s Dask, and Julia’s JuliaDB.jl for medium data which are datasets that are too large for RAM but not quite large enough to qualify as big data.

You can install the released version of disk.frame from CRAN with:

And the development version from GitHub with:

On some platforms, such as SageMaker, you may need to explicitly specify a repo like this

Please see these vignettes and articles about disk.frame

a) What is {disk.frame} and why create it?

disk.frame is an R package that provides a framework for manipulating larger-than-RAM structured tabular data on disk efficiently. The reason one would want to manipulate data on disk is that it allows arbitrarily large datasets to be processed by R. In other words, we go from “R can only deal with data that fits in RAM” to “R can deal with any data that fits on disk”. See the next section.

b) How is it different to data.frame and data.table?

A data.frame in R is an in-memory data structure, which means that R must load the data in its entirety into RAM. A corollary of this is that only data that can fit into RAM can be processed using data.frames. This places significant restrictions on what R can process with minimal hassle.

In contrast, disk.frame provides a framework to store and manipulate data on the hard drive. It does this by loading only a small part of the data, called a chunk, into RAM; process the chunk, write out the results and repeat with the next chunk. This chunking strategy is widely applied in other packages to enable processing large amounts of data in R, for example, see chunkded arkdb, and iotools.

Furthermore, there is a row-limit of 2^31 for data.frames in R; hence an alternate approach is needed to apply R to these large datasets. The chunking mechanism in disk.frame provides such an avenue to enable data manipulation beyond the 2^31 row limit.

c) How is {disk.frame} different to previous “big” data solutions for R?

R has many packages that can deal with larger-than-RAM datasets, including ff and bigmemory. However, ff and bigmemory restrict the user to primitive data types such as double, which means they do not support character (string) and factor types. In contrast, disk.frame makes use of data.table::data.table and data.frame directly, so all data types are supported. Also, disk.frame strives to provide an API that is as similar to data.frame’s where possible. disk.frame supports many dplyr verbs for manipulating disk.frames.

d) How does {disk.frame} work?

disk.frame makes it easy to manipulate the underlying chunks by implementing dplyr functions/verbs and other convenient functions (e.g. the cmap(a.disk.frame, fn, lazy = F) function which applies the function fn to each chunk of a.disk.frame in parallel). So that disk.frame can be manipulated in a similar fashion to in-memory data.frames.

e) How is {disk.frame} different from Spark, Dask, and JuliaDB.jl?

Spark is primarily a distributed system that also works on a single machine. Dask is a Python package that is most similar to disk.frame, and JuliaDB.jl is a Julia package. All three can distribute work over a cluster of computers. However, disk.frame currently cannot distribute data processes over many computers, and is, therefore, single machine focused.

In R, one can access Spark via sparklyr, but that requires a Spark cluster to be set up. On the other hand disk.frame requires zero-setup apart from running install.packages("disk.frame") or devtools::install_github("xiaodaigh/disk.frame").

Finally, Spark can only apply functions that are implemented for Spark, whereas disk.frame can use any function in R including user-defined functions.

disk.frame works best if it can process multiple data chunks in parallel. The best way to set-up disk.frame so that each CPU core runs a background worker is by using

The setup_disk.frame() sets up background workers equal to the number of CPU cores; please note that, by default, hyper-threaded cores are counted as one not two.

Alternatively, one may specify the number of workers using setup_disk.frame(workers = n).

{disk.frame} aims to support as many dplyr verbs as possible. For example

Starting from disk.frame v0.3.0, there is group_by support for a limited set of functions. For example:

The results should be exactly the same as if applying the same group-by operations on a data.frame. If not, please report a bug.

If a function you like is missing, please make a feature request here. It is a limitation that function that depend on the order a column can only be obtained using estimated methods.

The result grp_by_stage1 is a data.table so we can finish off the two-stage aggregation using data.table syntax

To find out where the disk.frame is stored on disk:

A number of data.frame functions are implemented for disk.frame

This project exists thanks to all the people who contribute.

The work priorities at this stage are

Blogs and other resources

Please register your interest at:

If you like disk.frame and want to speed up its development or perhaps you have a feature request? Please consider sponsoring disk.frame on Open Collective

Thank you to all our backers!

Support disk.frame development by becoming a sponsor. Your logo will show up here with a link to your website.

Do you need help with machine learning and data science in R, Python, or Julia? I am available for Machine Learning/Data Science/R/Python/Julia consulting! Email me

Do you wish to give back the open-source community in non-financial ways? Here are some ways you can contribute